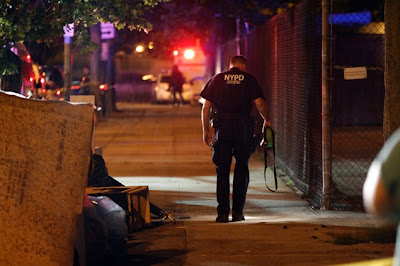 NEW YORK  — A woman waiting for a taxi cab in Brooklyn in Sunday night was suddenly attacked. Police are looking for the man who dragged her into a building and sexually assaulted her on the roof.

Neighbors said yelling and screaming is not unusual in this neighborhood of Crown Heights on Bergen and Kingston, but what happened Sunday night was.

Police told CBS 2’s Rachel Stockman the attacker approached a 19-year-old woman with a box cutter and forced her up six flights of stairs, taking her here to the rooftop before violently sexually assaulting her.

One neighbor, who didn’t want to be identified, said neighbors in the building did nothing as the young woman screamed.

“When it happened last night, no one cared. It was like the little boy that cried wolf,” the neighbor said. “The guy ran out that door. She sat down right here, and said the guy violated her.”

One man tried to track down the suspect, but said he got away too fast.

“It looked like he was short and light skinned. He had no shirt on,” the man said.

Police said they only have a limited description of the attacker, who was said to be in his 20s.

Neighbors said they are worried that he is on the loose.

“This is crazy. That could have been my daughter,” Millicent Gaskin said.

Another concern is the unlocked front door of the apartment complex.

“It’s a constant thing, every day, every week. We all complain about it and they do nothing,” neighbor Cyone Thomas said.

Police spent Monday continuing to track down leads, but said this appears to be a random attack.

The victim was treated for her injuries at Kings County Hospital, an FDNY spokesman said.