Mystery: The teen is appears to be in a basement and is aged between 13 and 19. He is wearing a Minnesota Twins baseball T-shirt 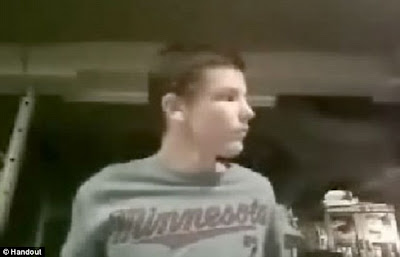 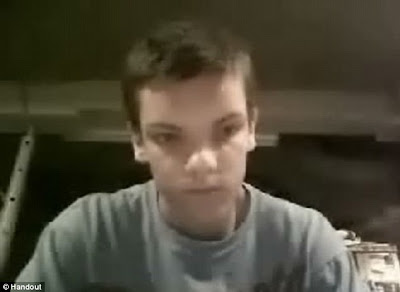 Federal law enforcement agents are seeking the public's help in identifying a boy in a video who they believe is in imminent danger. They say at least one other young person is also at risk in what they call only a "dangerous situation."

Agents from Immigration and Customs Enforcement's Homeland Security Investigations are releasing few details about the video and what it shows, citing privacy reasons, but the agency has released two still images from the video to the public.

They show only the boy's face and profile.


"We know that the people involved in this are in a dangerous environment based on the information we've received and the intelligence we've gathered so far," said ICE spokesman Shawn Neudauer.

The video was online, though Neudauer would not say in what capacity. He said agents got the video through a lead in another investigation.

The images show a boy between 13 and 19 years old and in a basement, the agents believe. Neudauer would not say what the boy is doing in the video.

"We believe there's an adult involved in all of this," Neudauer said from Minneapolis, Minnesota. "If we can identify the young person involved, we suspect that we'll be able to remove a couple of young people from a dangerous environment and also, perhaps, identify an adult."

The boy in the video is wearing a Minnesota Twins baseball T-shirt, Neudauer said, which leads agents to believe the video was likely recorded in Minnesota or western Wisconsin, home to most of the team's fans, or that the boy was recently in that area.

"It is entirely possible this young man is not currently in Minnesota or Wisconsin, but has either a friend or relative in the area, or recently moved from one of those states," Neudauer said.

Agents also believe the recording was made within the past two years, and probably within the past 18 months, based on the boy's T-shirt. It was first marketed by the Twins in July 2010, but the logo appears faded from several washings, Neudauer said.

"Issuing a public plea is an extraordinary step by ICE's Homeland Security Investigations, warranted by our belief that there may be young people at risk without the ability to ask for law enforcement's help," he said.

"We need to find this person," he said.

He said anyone who thinks they know the young man is encouraged to call the Homeland Security Investigations tip line, 866-347-2423, or 866-DHS-2ICE.

By Melissa Gray, CNN
Posted by joe levin at 2:11 PM