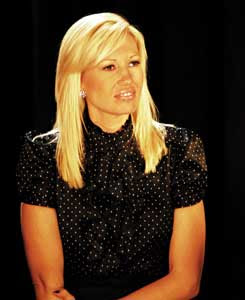 It was the spring of 2001, when a 19-year-old college student named Natasha walked out of a restaurant in northern California to get a sweater from her car.

The next thing she knew, Natasha was forced at gunpoint into the back of a Mercedes. According to Natasha, "The only thing I knew about was what I've seen on TV, that you're kidnapped and you die. They rape you and they kill you."

Natasha's kidnappers took her to a home and locked her in a room with no furniture and no way out. For days she wondered what was going to happen to her and then the door opened, and life as she knew it was over.

Natasha grew up in the upper middle class suburbs of northern California with her loving and supportive parents. At her private school, she participated in many extracurricular activities.

"I was on the swim team, I was a cheerleader and I was involved in student council," Natasha said. "I feel like I lived a picture perfect life."

"We had a strong mother-daughter relationship," Natasha's mother Debby said. "She always was comfortable coming to me."

Her father, Stephen, was self-employed and spent a lot of time with his daughter. He described her as, "a beautiful girl with a heart of gold. All she ever really wants is to help people."

After graduating from high school, Natasha enrolled in a local community college. Mid-way through her freshman year, Natasha was approached by a woman while shopping at a mall. The woman complimented Natasha on her makeup and asked if she had ever considered a career in the in makeup industry.

"I was approached to do makeup for like on movie sets and for fashion shows," Natasha recalled. "She says, 'we're looking for girls to do makeup professionally; would you be interested?'"

The woman handed Natasha her business card and told her to call if she was interested. A short time later, Natasha called the woman.

After a series of phone interviews, Natasha was invited to an office to fill out paperwork and a makeup test. When she left, they told her they would contact her if she got the job.

A couple of days later the woman called and offered Natasha a position on the makeup team. They asked her to meet at a local restaurant to go over some final details.

When she arrived at the restaurant, Natasha immediately sensed something was wrong.

"I felt like the woman started being short with me, and uncomfortable," Natasha said. "I felt like she was looking at her boss in a weird way. I started getting a completely different vibe."

Natasha excused herself from the table. Her plan was to leave and not come back, but she was kidnapped when she walked out the restaurant.

When Natasha's captors eventually let her out of the room, she was introduced to a pimp known on the streets as Spyder. Spyder informed Natasha that she would now be working for him as a prostitute.

And she wasn't alone. According to Natasha and the police, Spyder had many girls working for him. To control Natasha, police say Spyder threatened to kill her family if she ever tried escape. Natasha told AMW she was also physically beaten when she didn't comply with his rules.

"The fear was constant," Natasha said. "It was constant: 'please don't hurt my family. I will do whatever you want.'"

Detectives say Spyder even drove Natasha by her younger brother's school to show her how easy it would be to harm her family if she ever tried to run.

Natasha's parents had no idea what was going on, because Spyder allowed her to call home.

"I was able to contact my family and let them know that I was okay," Natasha recalled. "He would tell me what to say; we were on speakerphone."

Natasha's mother recalls talking to her daughter all the time.

"he stayed in contact with us. It was not like we worried," Debby said. "Everything seemed at the time perfectly fine."

"The only thing I knew about was what I've seen on TV, that you're kidnapped and you die. They rape you, and they kill you."
Trafficked

For the next 10 months, Spyder trafficked Natasha all over the United States as a sex slave. According to Natasha, the clients weren't average Joe's. These were men who paid thousands and thousands of dollars to Spyder.

Natasha and the other girls were advertised on Spyder's website. The women never booked their own appointments and they never received any of the money. It all went to Spyder.

Natasha had no hope. She sacrificed her body and soul to save her family and was convinced she would die living this life.

But police say everything changed when Natasha met Spyder's latest victim, a girl named Karen.
Natasha told AMW that she felt an immediate connection to Karen. She took the young girl under her wing and tried to protect her. But it wasn't until one night when police say Spyder viciously beat Karen that Natasha decided she was done with this life.

"I never saw him beat somebody so bad in my life for the time I was there," Natasha said. "Her eye was like, almost out of her socket."

"That's when I decided that I was going to get her out of there," Natasha said.

Within days, Natasha reached out to one of Karen's prospective clients. She gave the man her own parents' phone number in California and asked him to call them for help. Not only did her call her parents, but he also called the New York Police Department.

Detectives found Natasha, Karen, and Spyder's partner, a woman named Avisa Lavassani, at a hotel in Manhatten. All three were taken into custody.

Lavassani was charged with promoting prostitution and later convicted. But by the time police learned where Spyder was staying, he was long gone.

Investigators originally thought Spyder's name was Leland Reed and indicted him for promoting prostitution and assault. Police have since learned that his real name is James Vernon Joseph Jr. According to the U.S. Marshals, he has a criminal history of burglary, possession of firearms, fraud, kidnapping, pandering and identity theft.

When Natasha's parents got off the phone with NYPD detectives from NYPD, they quickly made arrangements to bring their daughter back home.

"I didn't need broad details over a telephone call," her father Stephen said. "In my mind, my daughter was in trouble, and I had to get to her."

"When you watch TV and you see these stories, you're always like, 'gosh, that would be horrible; I'm glad that's not me,'" Debby said. "And then all of a sudden, you're the story -- it's a whole different picture."

When Stephen landed in New York, he couldn't get to the police station fast enough. Detectives briefed him on what Natasha and Karen had gone through for the past 10 months.

"If I hadn't been in a police station with detectives talking to me, explaining what was going on," Stephen said, "I would have thought this was a story. There's just no way this happens. There's no way this happens in my family; I am the father that protects the kids."

When Natasha finally was reunited with her dad, it was surreal.

"I remember that we were at the police station and it was like the next day, and he sees me and he's like walking toward me, he's kinda teary-eyed, kinda crying -- happy to see me," Natasha remembered. "All the cops in there are crying too; it's like this amazing moment."

When they returned to California, the girls were still struggling with what they'd gone through. Karen stayed with Natasha and her family for awhile, and the girls were never left alone.

After awhile, things seemed to return to normal. Natasha enrolled back in school, and Karen returned to her parents' home. But like all victims and their families know, it's just not that simple.

Natasha tried to be the strong survivor. She worked with local advocate groups to help other victims and was a guest speaker at several law enforcement conferences to bring awareness to sex trafficking.

She was on the right track, but like most victims, Natasha didn't know who she was anymore. She was going through the motions, doing what everyone thought she should do.

But the girl and dreams she had for herself were taken away the day she was forced into the back of that Mercedes. Natasha had to start over, and that wasn't easy. When she was recovered, Natasha and her family felt like there wasn’t anyone who knew how to deal with sex trafficking victims. In fact, there weren't even specific laws on the books in 2002. There were sex slavery laws, but not sex trafficking laws. It wasn't until 2004, when the Child Protect Act was passed that people and law enforcement began to recognize and take sex trafficking seriously.

Natasha felt like she was on her own to figure out how to fit back into society.

"It took me years to really find who I was," she said. "When you feel like you're worth nothing, you're going to treat your body and yourself like you are worth nothing, and while you're healing you're making a lot of mistakes because you're trying to find out who you are."

Natasha told AMW producers there were decisions she made that she may never had made if she wasn't sex trafficked.

"I definitely wouldn't have gotten into the adult industry," she said. "My life before, I just did not come from a place where that's something you aspire to do.

"I know girls," she continued, "that have survived being trafficked and they end up in clubs or on the streets because it's like what I was saying, it's a reflection of your self-worth. Your behaviors and actions that you display are now how you see yourself and that goes back to what you're being told when you're trafficked."

Eight years later, Natasha finally feels like she's in control of her life and has found a path she is proud of.

"I think she's in a really good place now, but at the same time everything she has gone through has made her the strong woman that she is today," her mother said.

Natasha's hope is that by sharing her story she can save other girls and their families from going through what she did. She also wants to give girls who are stuck in the trafficking industry hope that things can be different and to let them know there is a good life out there.
Posted by joe levin at 7:25 AM