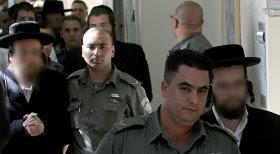 Jerusalem - The remand of five of the six yeshiva managers suspected of defrauding the state of millions of shekels was extended on Friday till Tuesday. The sixth was released on bail to home arrest.

Police believe the men, who were arrested on Sunday, produced fraudulent identity cards to create the appearance of greater numbers of students in their institutions, which receive financial support on a per capita basis from the Education Ministry.

The police investigation continues
Posted by joe levin at 9:07 AM