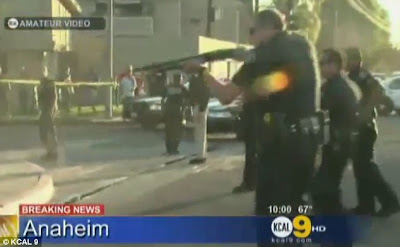 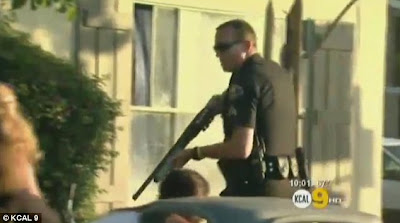 Shocking video has emerged which depicts police officers firing rubber bullets into a rioting crowd which includes women and children.


The footage also shows a police dog rushing in to the fray and nearly knocking over a mother who was pushing her baby in a stroller.

The violent scenes came in the wake of an incident where a 24-year-old man was shot dead after running away from police, two of whom have now been suspended.

As officers were investigating what happened at the scene in Anaheim, California on Saturday, an angry group of people began yelling and throwing bottles at them, according to Sergeant Bob Dunn.

After police detained several people, the crowd apparently advanced on the officers, who responded by firing tear gas and beanbag rounds at them.

Video captured by a bystander and broadcast by KCAL-TV showed a chaotic scene in which officers fired beanbag rounds as some people ducked to the ground and others scattered screaming.

A man is seen yelling at an officer even as a weapon is pointed at him, while two adults huddled to shield a boy and girl.


Meanwhile, a police dog ran into several people sitting on the grass, including a woman and a child in a stroller, before biting a man in the arm.

The woman with the child was Susan Lopez, who tearfully told KCAL: 'They just released the dog, and I had my baby in my stroller.'

Mr Dunn said the dog was 'deployed accidentally' after somehow escaping from a patrol car.

On Sunday, demonstrators stormed the headquarters of Anaheim Police as officers prepared to hold a news conference about the unrest.


Protestors chanted 'no justice, no peace' and 'cops, pigs, murderers' as officers stood by and watched, according to the Orange County Register.

The shooting that kicked off the violence involved Manuel Diaz, 24, who was shot in front of an apartment complex around 4pm on Saturday following a foot chase and died in hospital three hours later.

The man's niece, 16-year-old Daisy Gonzalez, said her uncle probaly ran away from officers when they approached him because of his past experience with law enforcement.


'He [doesn't] like cops,' Gonzalez told the Register after lighting a candle for her uncle. 'He never liked them because all they do is harass and arrest anyone.'

She cursed at officers who were nearby and a police helicopter that hovered overhead.