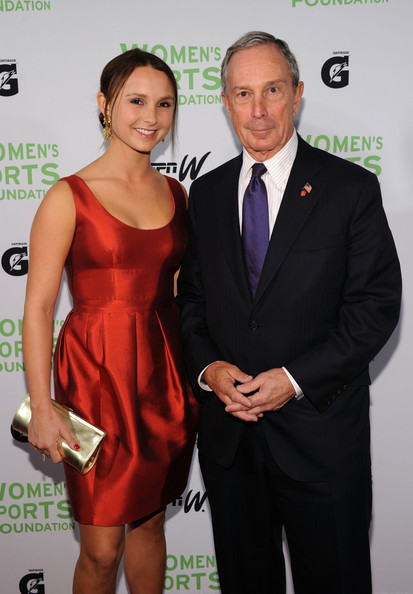 Michael Bloomberg's younger daughter has just announced that she is expecting her first child and the baby's father is believed to be her Argentinian boyfriend.

Georgina, 30, is a professional equestrian and she competes on the same horse racing circuit as her rumored boyfriend Ramiro Quintana.

Though her spokesman confirmed the pregnancy
Wednesday and said that the family was very happy, other sources say that her father is upset about how fast her relationship with the reported ladies’ man has escalated.

This will be the New York City Mayor's first grandchild as his older daughter Emma, 34, has been married for eight years but does not have a child.

'Georgina is pretty excited about the baby, but her dad isn’t too happy about it. It’s so sudden,' an unidentified source in Wellington, Florida told Gossip Extra.

Georgina splits her time between New York and Florida as there are a number of horse races in Wellington in the winter months.

'Georgina can do better when it comes to men. The guy’s known for his roving eye and partying as much as his riding,' the source continued.

The New York Post reports that the baby will be born sometime this winter after her father leaves public office in November.

'Georgina and her boyfriend are excited to be expecting a baby this winter. Her entire family has been incredibly supportive,' Georgina's spokesman said in a statement to the paper.

The expectant mother is sponsored by Ariat International and specializes in show jumping.

She previously dated fellow show jumper Cian O'Connor and is also believed to have had a relationship with speed skater Joey Cheek.

The Post reports that she and Quintana have been 'quietly dating for a while' and Gossip Extra specifies that they have been together for six months.
Posted by joe levin at 2:06 PM