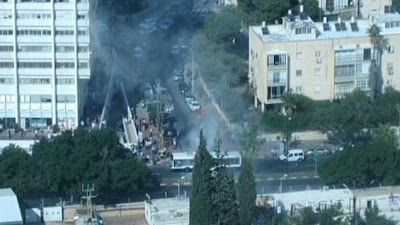 A massive blast occured at around noon Wednesday on bus line 142 on Shaul Hamelech Street - at the heart of Tel Aviv, near the Kirya military compound. Rescue forces reported of a mass casualty event. It is suspected there may be a second device.

The security establishment estimates that whoever orchestrated the attack was not a member of a known terror organization.

The wounded were evacuated to the Tel Aviv Sourasky Medical Center. Doctors said that the condition of person who was seriously injured is not life threatening.

An eye witness at the scene said: “I heard a boom and then saw a black cloud. Guys in the cab radio said 'A bus is dismantled.'”

Eye witnesses near the Kirya reported that the loudspeakers at the compound called all soldiers to take cover. Many police cars arrived at the area.

Yoni Yossef of ZAKA was one of the first people to arrive at the scene. “There were panic and chaos,” he said; “People were lying outside the bus. Paramedics started to arrive. People aren’t used to this. It's taking us years back.”

“Such a terror attack has great significance,” Aharonovich said. “Hamas is a murderous organization that stands for the destruction of Israel. We have to strike all terror hubs.”

Tomer Simon, an eye witness, recounted: “There was a horrible explosion; we were sure at first that it’s a hit on Tel Aviv and the sirens just didn’t go off. I opened my office window and saw the bus crushed.”

Simon added: “I ran and tried to help those who were injured as much as I could. All the windows of the bus were smashed.”

A reporter of the al-Mayadeen network in Gaza reported of shots being fired in the air as a sign of joy over the explosion.

The network also reported that Hamas welcomed the bombing, describing it as a natural response to the “massacre of civilians” during Operation Pillar of Defense.

The event occurred against the backdrop of Operation Pillar of Defense and the continued firing of rockets from Gaza at Israel.