Michigan teacher is suspended for playing song about being gay 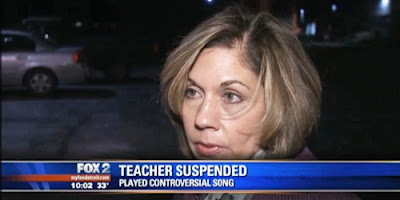 SOUTH LYON, Mich. - A South Lyon performing arts teacher hit a low note with school officials. She was suspended without pay for playing a song about being gay during class.


It was like any other day at South Lyon's Centennial Middle School. Inside Ms. Johnson's eighth grade performing arts class. Last Wednesday, a student asked if he could play a song.

"I asked him a few questions about the song. If it was violent, if there was any profanity, and he said no. And I said this sounds like a great song to go ahead and use for the class," said Susan Johnson.

The song is called "Same Love" written in support of same sex marriage. Underground rapper Ben Maclemore tackles the dangers of hate and stereotypes by showing the struggle of a homosexual man from birth to death. As Johnson listened to the song, she said she thought to herself this was something her students could learn from.

However, another student in class didn't agree with the lyrics, went to the office and complained. Before the school day ended, Johnson claims the principal and assistant superintendent told her she was suspended indefinitely without pay.


"I don't think that it was really even thought through," she said. "I was paralyzed. I really didn't understand why I was being suspended."

"No one is going to have a comment for you. We don't go on camera here in South Lyon," she said.

"I'm very disappointed in the bias, the bigotry that I feel that they're really hiding behind," said Johnson.

During a closed door meeting, Johnson found out she would be suspended a total of three days, not paid for two.

Baker gave Johnson paperwork to explain why. The district claims the song had controversial content -- homosexuality, religion, politics views and a sexual slur. It also says she should have asked permission to play the song.

"I really love my kids and I never want to hurt them, but I also know that there's a lot of bullying and there's a lot of gay bashing and racial issues going on in our country and I want the kids to feel comfortable in my class no matter who they are," Johnson said.

Johnson told us the ACLU and Affirmation, the LGBT support group, are both getting involved. Johnson may be headed back to work on Thursday, but it seems this is far from over.
Fox 2 News Headlines
Posted by joe levin at 4:40 PM