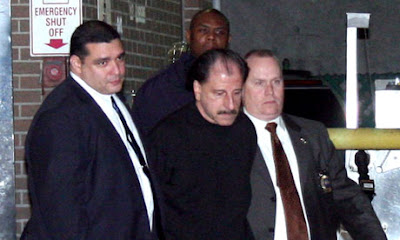 
Salvatore Perrone, 64, appeared in Brooklyn Criminal Court to face charges that he shot and killed the men between July and November.

Mohamed Gebeli, 65; Isaac Kadare, 59; and Rahmatollah Vahidipour, 78, were all found dead inside their stores. The men were of Middle Eastern descent.

They were all shot with a .22 caliber rifle, according to investigators.

Perrone, who was given the name "John Doe Duffel Bag," because he was seen on surveillance video carrying a large bag near the scene of last Friday's murder of Vahidipour was apprehended by police after a Bay Ridge pharmacy employee recognized him as a regular.

Police say the video footage was a big break in the case for investigators.

Perrone confessed to the murders only after talking to someone he thought was a CIA agent, according to law-enforcement officials.

Police say they have not cited a motive but believe the shootings were racially motivated.

Authorities say the suspect may have been planning another murder.