Boy dead after bus crashes into home on Long Island 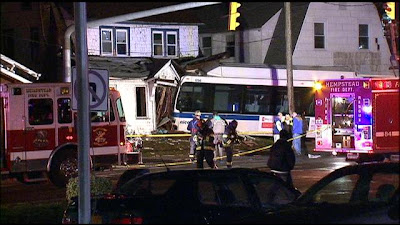 A 6-year-old boy was killed and at least 12 people were injured when a Nassau County bus careened off the road and crashed into a house in Hempstead, L.I., Tuesday night, police and witnesses said.


The N70 Nassau Inter-County Express bus was heading west on Fulton Ave. when the driver swerved near Nassau Place to avoid mowing down a pedestrian in the roadway around 9:30 p.m., Hempstead police said.

The bus carrying 20 passengers struck the pedestrian, hopped a curb and slammed into a white two-story house, where two brothers were getting ready for bed, police and witnesses said.


"It came out of nowhere," said Alida Gutierrez, a family friend who was inside the home. "It was loud and horrifying and tore down the front of the house."

"The boys' mom and I were in the kitchen, preparing the kids' lunch just like we always do," Gutierrez continued in between sobs. "We were just talking. Then… I can't describe it."


Rescuers found one of the boys, identified by Gutierrez as David Santana, 6, pinned between the bus and a portion of the house.

He had been walking from his bedroom when the bus smashed through the wall, Gutierrez said.

He died at a local hospital

"Some of the glass cut Josue's legs and body. There was blood everywhere," he said. Laso said the family moved from El Salvador nine years ago.

At least nine other people, including the pedestrian, suffered non-life threatening injuries, first responders at the scene said.