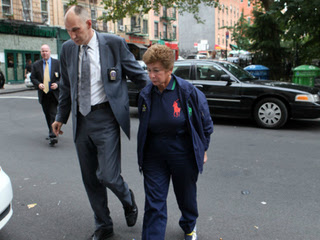 
A judge dismissed the case Friday without prejudice, meaning it could be brought back.

Goodman, 70, was accused of bludgeoning her 80-year-old husband Alan to death with a coffee cup in April.

Authorities initially believed he fell down stairs at home while his wife was away, but later decided it was homicide after a mortuary reported suspicious injuries.

“The story of him falling down the stairs, although it may have occurred, it didn’t fit the evidence at scene,” said the LAPD’s Dave Storaker.

People who live next to the couple’s apartment in California said police knocked on their doors the night of Alan Goodman’s death.

Members of the LAPD, working with NYPD officers, made the arrest in August outside the Sheraton Hotel on 7th Avenue in Midtown just before 8 a.m.

Goodman who was in New York to be a line judge in the US Open, was led out of a police precinct in the afternoon wearing her referee gear.

In September, her daughter spoke out in her defense.

“It’s insane. It doesn’t make any sense. It’s something that just can’t happen and it is and we can’t make two cents of it,” Alison Rogers said.

Rogers said her mother was a loving wife not capable of killing her husband of 50 years.

“They never fought. It was a great relationship,” Rogers said.


“She’s been in contact with police. They did not call her, tell her to come in. They waited until she went to New York, maybe to make two headlines,” Rogers said.

Lois Goodman spent two weeks behind bars, before being released on bail. She joined her daughters at a memorial to grieve her long time love. Rogers said reports of her mother was having an affair are untrue.

“She doesn’t know what happened. As far as I’m concerned she’s physically and emotionally not capable of doing something,” Rogers said.

The family sold a car, took out loans and maxed out credit cards to fund her defense.