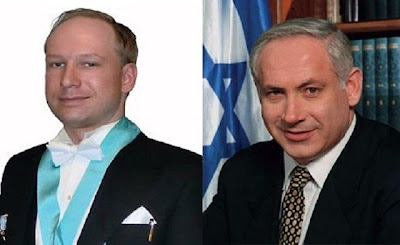 
A former correspondent with the BBC, known for his criticism of Israel, has compared Prime Minister Binyamin Netanyahu with none other than Anders Behring Breivik, the Norwegian man currently on trial for killing 77 people in a bomb and shooting spree last July.


Alan Hart, a longtime sharp critic of Zionism and of the State of Israel, wrote an article on Thursday entitled “What do Breivik and Netanyahu have in common?” in which he compares the mass murderer with the Israeli prime minister.

“Let’s start with a glance at what they do not have in common,” wrote Hart. “The man now on trial for killing 77 people in bomb and gun attacks in Norway last July has admitted, even boasted about, what he did. Netanyahu denies Zionism’s crimes.

“The main thing they have in common stems from the fact that they both live in fantasy worlds of their own creation and talk a lot of extreme rightwing nonsense,” he added.

Hart then went on describe as “nonsense” Netanyahu’s perception that Israel is under threat because of the Iranian nuclear program.


“Arguably the single most ridiculous statement he has made to date on this subject was in 2006 when, as the chairman of Likud, he addressed a gathering of Jewish American organizations. He said then, ‘It’s 1938 and Iran is Germany,’” Hart wrote.


“So what Breivik and Netanyahu have in common is, it seems to me, the mania of victimhood,” he added.


Hart concluded his piece by saying, “We know where Breivik’s mania led him. We can only speculate about where Netanyahu’s mania will lead his Israel. On present course its final destination seems to be disaster. The question is, will it be disaster only for the Zionist enterprise or disaster for the region and possibly the whole world?”

In 2007, Hart wrote a letter to David Cameron, then the leader of the British Conservative party and today the British prime minister, in which he wrote, “The colonial enterprise that Zionism is has corrupted everything it touched, beginning with the United Nations and including the mainstream media, what passes for democracy in the Western world (America especially) and Judaism itself.”

In April 2010, in his book entitled “Zionism: The Real Enemy of the Jews”, Hart wrote that “Zionism’s assertion that Israel was given its birth certificate and thus legitimacy by the UN General Assembly partition resolution of 29 November 1947 is pure propaganda nonsense.” In the same book he wrote that “Israel, which came into being mainly as a consequence of Zionist terrorism and pre-planned ethnic cleansing, had no right to exist and, more to the point, could have no right to exist” without Arab consent, which they have never given.
Posted by joe levin at 2:19 PM