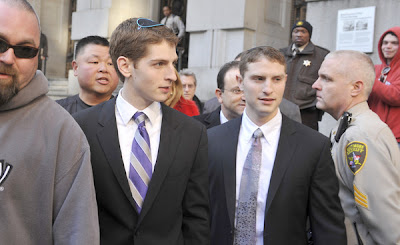 Prosecutors are barreling forward with their case despite that dramatic set back. And they’re attempting to paint the defendants as bullies who may have tried to cover a few things up.


On Thursday, prosecutors called on several witnesses in their case against the Werdesheim brothers– 24-year-old Eliyahu and 21-year-old Avi– are accused of beating the then 15-year-old Corey Ausby in November 2010 during a call with Shomrim, an orthodox Jewish watch group.

One witness, a retired Navy SEAL, said he watched the Werdesheims follow Ausby in a convertible, telling the teenager who was on foot he didn’t belong in the neighborhood.

The witness said: “He (Ausby) was scared. He was petrified. It looked like he wanted to disappear and not be there.”

The story corroborates what Ausby told police during the investigation. Although he refuses to testify and even told the judge he believes the charges should be dropped.

Community activists who believe the violence was racially motivated are closely monitoring the trial.

“I think that the case is still very much in motion and the general public should know that righteousness will still prevail in this case,” Rev. C.D. Witherspoon, a spectator in the courtroom, said.


More powerful testimony came from a former reporter for the Baltimroe Jewish Times who admitted he allowed Eliyahu to edit an article he wrote two weeks after the incident, which included an exclusive interview with the brothers.

He testified Eliyahu cut out several facts about the incident and about his background as a member of the special forces for the Israeli Army.


Ausby’s mother has also filed a civil lawsuit in this case on her son’s behalf. They are seeking millions of dollars.

The trial is expected to last for several more days.