Home: This is the house in Maryland where Secret Service agent Arthur Huntington is believed to live - he put it up for sale last week 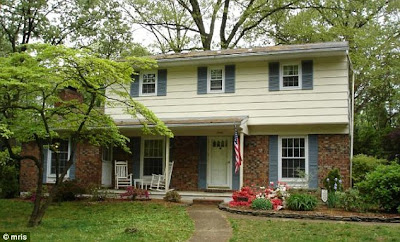 The wife of the cheapskate Secret Service agent — whose refusal to fully pay a Colombian hooker rocked the Obama White House — has vowed to stay with her straying husband.

Her seemingly All-American life in tatters, Jolie Huntington has told relatives that she won’t abandon her disgraced spouse Arthur.

“Jolie has said she’s going to make the marriage work,” said Pastor Jose Rodriguez, a Rochester, N.Y., minister whose son is married to the woman’s sister.

Arthur Huntington has reportedly left the Secret Service in the wake of the sordid scandal.

He never seemed like the type of man to inflict suffering on his wife of nearly two decades, according to those who thought they knew him.

“He wouldn’t do that,” said a female relative who asked that her name not be used. “Not the Arthur that I know. He wouldn’t. They go to church every week.”

“It’s out of character — the Arthur I know, he’s very dedicated to the family, very loyal,” said Teresita Rodriguez, 65, who along with her husband Jose has known Huntington since he was a child.

Relatives said Huntington, 41, never used to date around. And he only had three passions: his wife, their two sons and his job.

While growing up in upstate New York, Huntington went to North Star Christian Academy and attended Roberts Wesleyan College to study criminal justice. He started out working as a security guard at Greater Rochester International Airport, relatives said, until he landed a job as a cop near Tampa, Fla.

Then he climbed even higher — by joining the Secret Service. His devotion to the agency was so great that he turned down a cushy job on former President George H.W. Bush’s private security team in order to keep his high-pressure position protecting the occupants of the White House.

“You could tell he loved it,” said Jose Rodriguez, 60. “There was a real commitment.”


Nearly two dozen Secret Service agents and U.S. military personnel were implicated in the humiliating scandal that erupted days before world leaders met in the sinful seaside city of Cartagena.

After a booze-filled night, the men brought more than 20 prostitutes back to their rooms. The following morning, Huntington allegedly paid hooker Dania Suarez only $28 of his $800 tab.

The embarrassing scandal prompted the Secret Service to issue hard new regulations, including a ban on visiting with foreigners and a crackdown on heavy drinking.


The fiasco has seemingly sent Huntington and his wife into hiding — they have put their two-story red brick home in Severna Park, Md., on the market.

The colonial tri-level house, which is listed for $465,000, features a neatly-manicured front lawn and an American flag hanging from the front porch. It sits in a tidy neighborhood that is home to many other government employees, including members of the Secret Service and CIA.

Jolie Huntington, 41, home-schooled the couple’s two sons, aged 12 and 15. She and her husband were active in their local parish, Granite Baptist Church, neighbors said.

“We hurt for them,” said Richard Lejeune, an assistant pastor. “We hope the best for them and that they are able to weather the storm.”

The dedicated mother hen also is a contributor to the crafting websites Creative Memories and Etsy. The latter site displays her favorite scrapbook pages, featuring soccer and patriotic designs.