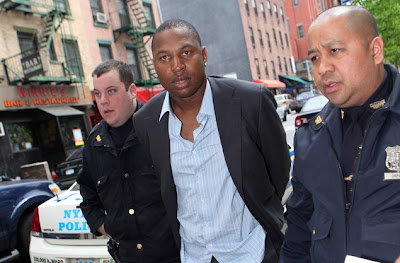 An intoxicated Young, 26, was collared shortly after he shoved the victim in front of the Hilton Hotel on Sixth Ave. about 2:40 a.m., the sources said.

The fracas ignited after Young was confronted for shouting anti-Semitic slurs at a Jewish panhandler, sources said.

Young — who has also been in trouble for his temper on the diamond — was taken to Roosevelt Hospital for detox before later being arrested for a hate crime.

His victim — identified as Jason Shank, 32, from Illinois — was treated for scratches to his arm but not hospitalized, sources said.

Investigators believe Shank and three friends were returning to their hotel from a night out when they were approached by a panhandler wearing a yarmulke and a Star of David, sources said.

The foursome gave the panhandler some cash before turning toward the Hilton — where they brushed past a visibly drunk Young.

The ballplayer shouted “F---king Jew” at the panhandler, but Shank and his friends thought Young was talking to them, sources said.

The four men, none of whom are Jewish, then turned to confront the ballplayer, and Young and Shank briefly shoved each other, sources said.

Shank and his pals then entered the hotel, with Young hot on their heels, sources said.

Hotel security briefly detained Young until he proved that he was also staying in the Hilton. He was then allowed to return to his fifteenth-floor room as a witness to the brief altercation called 911.

Cops arrived at the hotel minutes later and arrested the troubled player. He was held at the Midtown North Precinct and said nothing to reporters when he was moved to Manhattan Criminal Court late Friday morning.

He was charged with aggravated harassment, which police classified as a hate crime. The charge is a misdemeanor.

Shank, who lives in a Chicago suburb, was not arrested.

Young hit the series-winning home run to knock the Yankees out of the playoffs last October — but is almost as well known for his angry antics as for his on-field performance.

The former number one overall pick,

Young was suspended 50 games while in the minor leagues after a wild run-in with an umpire in 2006.

After being called out on strikes, he refused to leave the batter’s box — and, once he finally did, he turned and hurled his bat at the umpire.

The umpire was not seriously hurt but Young was disciplined without pay.

The cannon-armed outfielder has been in the major leagues since late 2006 but has shown only flashes of the promise that made him a highly touted prospect.

While he finished second in the American League Rookie of the Year voting in 2007, he has already worn out his welcome on two teams after a series of clubhouse clashes.

Drafted by the Tampa Bay Rays, he was later dealt to the Minnesota Twins, who last year traded him to the Tigers.

Young, whose older brother Dimitri had a 12-year major league career, hit three home runs against the Yankees in last year’s first-round series, including one that provided the winning margin in decisive Game 5.

The Yankees and Tigers play in the Bronx at 7 p.m. Friday. Young’s availability for the series is unknown.

In a statement, the Tigers said the club is “aware of the situation, however it is our club policy not to comment on pending legal matters.”