US flag in, Israeli flag out 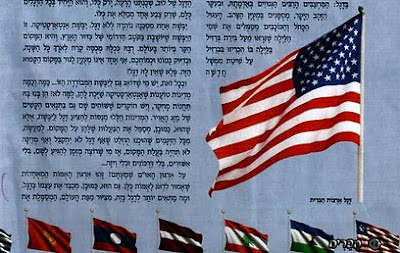 On eve of Independence Day, article in ultra-Orthodox children's paper features flags of US, Soviet Union and even the lifeguard's banner – but avoids mentioning Israel

On the eve of Independence Day, the Israeli flag seemed to adorn virtually every home and car across the country; but it was hardly mentioned in an article published that day in an ultra-Orthodox children's paper, which featured a thorough review of the flags of the world.

Last week's edition of the paper, Haverim ("Friends"), which accompanies the haredi weekly Bakehila (In the Community), included a feature focusing on the appearance, history and traditional use of flags from across the globe. The edge of the Israeli flag is shown on the article's first page, buried in a pile of banners from dozens of countries.

The article even displayed the Soviet Union's flag, explaining that the hammer and sickle stand for the working class. Libya, Cyprus, Japan and the United Nations got special attention as well.

The author also described the ceremonial uses of the flags, saying that they are "displayed on top of state institutions, like courts, parliamentary buildings and police stations. Occasionally, we hear that a country has lowered its flag to half-mast." Eluding the symbolism of being published on Memorial Day, the Israeli flag got no mention.

Bakehila is not affiliated with any haredi movement. Like other media outlets in the ultra-Orthodox community, a committee of religious experts oversees its content; it appears as though Israel's white-and-blue banner raised a red flag among the editors.


"A supposedly moderate newspaper's exclusion of the flag is disgraceful and parallels some haredim's habit of dishonoring the Memorial Day siren," said Rabbi Uri Regev, who heads Hiddush, an organization that promotes religious freedom.

"Especially on the eve of Independence Day, the editors chose to thoroughly review the significance of every possible flag – including the lifeguard's banner – but to ignore the white and blue flag.

"This is another proof that the core educational program, which includes civics and history studies, must be imposed on the ultra-Orthodox educational system, in order to make sure that haredi children also learn the real story behind the foundation of the state and its symbols, instead of growing up in a reality that boycotts the state."
Posted by joe levin at 10:59 AM