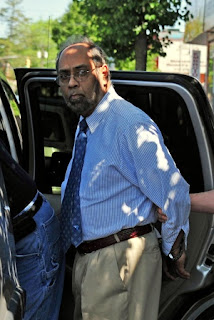 Federal drug agents this morning busted a moralizing Long Island pharmacy owner for illegally supplying the dope ingested by a whacked-out teen before she mowed down a retired doctor, who was gardening on her front lawn.

DEA agents hauled off Lutful Chowdhury, 61, of Westbury, and charged him with 14 felony forgery counts. He was arrested at the Aim Pharmacy in Baldwin that he owns and where he is the supervising pharmacist. He is accused of coaching his customers on how to steal or forge prescriptions so they can get their fixes.

Sources told The Post that Chowdhury’s pharmacy filled a stolen, forged Oxycodone prescription for Kayla Gerdes – who was high-as-a-kite on the stuff when she floored a van, mounted a lawn and killed Dr. Rebecca Twine-Wright, 69, last year.

As authorities investigated Gerdes, the DEA focused on the drug store where she had gotten the drugs – Chowdhury’s Aim Pharmacy – and found they "had been on the radar for years for excessive purchases of Hydrocodone and Oxycodone," a source said.

"Gerdes was part of a ring that was stealing and forging prescriptions and filling them at Aim Pharmacy," the source said. "Chowdhury was 'instructing' these individuals on how to avoid detection."

The Gerdes case highlights the growing national problem of prescription-drug abuse – something that kills more Americans a year than did crack cocaine at the height of the crack wars two decades ago.

“It’s good medicine in bad hands and that becomes the problem,” John Gilbride, the chief DEA agent in New York, told The Post in a recent interview. “The perception is that it is OK because it is sold from a drug store.”

Chowdhury is to be arraigned later today at Nassau County First District Court in Hempstead.

Four years ago, Chowdhury made news when he publicly called on pharmacists to exercise a “conscientious objection" and refuse to fill orders for contraceptives or abortion-inducing medications.

On his storefront, Chowdhury, a practicing Muslim, says his shop is closed for an hour every Friday for prayers.

A nearby shopowner who declined to be identified said today "I'm shocked" by the arrest. "He's a family man. He's a nice, moral man -- he's a good person. He doesn't seem like a greedy man. I don't believe it."

Twine-Wright's son, Chauncey Twine, was enraged at the pharmacist's actions when informed of the arrest by The Post today.

“What a total fraud! It’s just horrible – this guy is putting people’s lives at risk...He is very culpable for my mother’s death. He shares responsibility. I’m sure he has ruined many other lives.”

"It's an absolute outrage," Twine said, "that a pharmacist that you’re supposed to trust is abusing his position to facilitate illegal drug use."

In addition to Chowdhury, five other pharmacy workers are being charged today in connection with the alleged drug scheme.

On April 20, 2010, Gerdes was so stoned she seemed oblivious to the mangled body of her victim under the van and asked stunned witnesses to drive her to court, because she was late for a hearing on a previous arrest.

Later, Gerdes, then 18, chillingly told a cop that the death of the senior citizen wasn’t too bad because "she was old."

She also admitted that she saw her victim, who "looked up at me at the last second, but she was too old to get out of the way."

Even under arrest for manslaughter and driving under the influence of drugs, Gerdes, when left alone in police headquarters, pulled out some Oxycodone pills, crushed them in a dollar bill, lit them and inhaled the smoke to get high, according to police.

After she sobered up in jail, Gerdes declared the death was an accident and she had mistaken the gas pedal for the brake. "The monster I’ve been portrayed to be, I’m not. I’m so sorry for the family."
Posted by joe levin at 1:37 PM