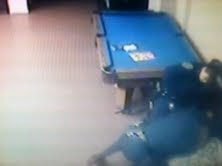 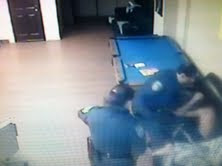 CROWN HEIGHTS  — On Monday evening, October 8, 2012, police were called about a man who was sleeping in the lounge of the ALIYA Center on East New York Ave. The caller may have mistakenly believed that the homeless man, Ehud H. Halevi, was loitering on the center’s property without permission.

ALIYA (Alternative Learning Institute for Young Adults) is a synagogue and outreach center for troubled youth in the Crown Heights neighborhood of Brooklyn.

Two officers from the 71st precinct, one male and one female, arrived and woke the man. Confused as to why he was being accosted by police, the man refused the officers’ attempts to escort him outside, insisting that he had permission to be there and asking that they allow him to prove it.

His pleas fell on deaf ears, and they proceeded to place him under arrest.

When he resisted arrest, the male officer flew into a rage and began to beat the defenseless man. As can be seen in the video below, the officer assumed a boxing stance and then lurched towards his victim, pummeling him from all sides.

Over the next couple of minutes the man is also pepper-sprayed and beaten with a truncheon by the female officer, all while posing no threat to the officers’ well-being whatsoever.

After a good two minutes of sadistic thrashing, the officers are joined by a squadron of their peers, and successfully put him in handcuffs and under arrest.

A source confirmed with me that the man had full permission to be there, and had been living there for a month without any trouble. It is unknown who called the police or why.

Adding insult to injury, the man is being charged with assault on a police officer(!) - a felony - which can bring a sentence of 5 years in prison upon conviction.

He is also facing four Misdemeanor charges and four violations, including trespassing, resisting arrest and harassment.

He has been released on bail.

ALIYA declined to comment on the matter in any official capacity.

The above video was obtained with the assistance of TOT Private Consulting Services.