Hairdresser Luciana D’Angelo of Borough Park, Brooklyn, claims she was sexual harassed by a co-worker and a part-owner of a SoHo hair salon 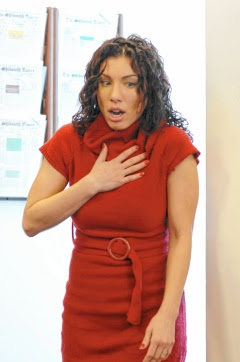 Liciana D'Angelo is a Brooklyn girl who has no patience for oblique flirting, veiled suggestions or guys who smack her tush.

And with her $16 million sex harassment suit against a trendy SoHo hair salon, she is single-handledly demolishing some stereotypes about male hairdressers.

D’Angelo worked at Devachan, a swanky salon on Broome St. that specializes in curly hair where a cut can cost $300.

She claims constant sexual harassment from male co-workers and bosses created a hostile work environment and resulted in her losing promotions, raises and her job.

“I really loved working there. It’s not your usual salon,” D’Angelo, of Borough Park, said in an interview.

But eventually, she said, “I hated going to work. I felt like a piece of garbage.”

In a statement, Devachan management dismissed D’Angelo as “a disgruntled former employee” who waited 18 months after her departure from the salon to make “malicious, defamatory and untrue allegations.”

“Devachan and its management have reviewed the allegations in the complaint and believe them to be completely without merit,” the statement said.

D’Angelo, 36, went to work at Devachan in January 2005. She said she thought co-worker Keith Magnussen was “just weird” when he complimented her on her eyes, said she was “so hot,” and offered to buy her shoes she’d admired, her court complaint says.

The married Magnussen also smacked her behind and told her he dreamed of making love to her on a salon chair, she alleges.

Supervisors told her to “ignore him,” D’Angelo said, but then she was assigned to work the station next to Magnussen and the leering intensified.

D’Angelo said Denivaldo DaSilva , a part-owner and manager, also harassed her — demanding a kiss at a Christmas party, stroking her upper arm and asking her in front of Magnussen how many sexual partners she’d ever had.

In 2009, DaSilva promoted her, moved her to the main salon away from Magnussen and even agreed to be her guarantor on a new rental apartment.

However, D'Angelo says DaSilva warned her when he signed the papers : "'What I give you, I can take away.'"

She said after she started dating a former salon employee, DaSilva’s assistant urged her to break up with the guy.

When she refused, she was assigned three clients a day instead of 10 and her income dropped sharply, she said.

She said DaSilva warned her that if he ended up having to pay her rent, she would “pay him back one way or another.”

In January 2010, D’Angelo said she accused DaSilva in writing of tolerating sexual harassment and he fired her.
Posted by joe levin at 5:02 AM