Angry Maserati owner hires men to smash up his $420,000 supercar 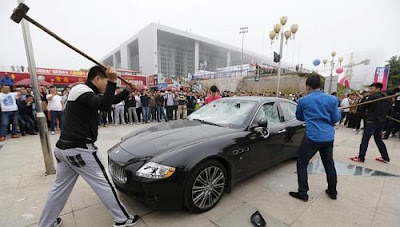 
The car owner, identified only by his surname Wang, had the group attack the Maserati Quattroporte at the opening of an auto show in the eastern city of Qingdao, in Shandong province, the Qingdao Morning Post said.

Video images showed the men going about their task with gusto, leaving the vehicle with a shattered windscreen and mirrors, the grille broken and dents to the bodywork, draped in a banner accusing the Italian manufacturer of poor decision-making.

Mr Wang bought the luxury car in 2011 for 2.6 million yuan, the report said - around 100 times the average income of Chinese urban residents last year.
Posted by joe levin at 6:10 PM