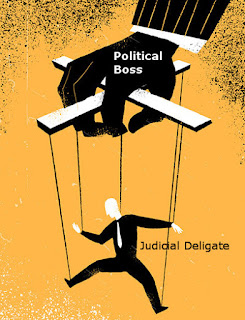 Legislators in Albany should replace the state's exclusionary judicial selection system in which judges are “made” with one that actually reflects our democratic values.
Last week, many New York voters looked at their election ballots and only saw judges. Even more confusing was that many of them had no opposition. In Brooklyn, for example, the same five candidates were listed three times, once for each of the major parties that nominated them for the five available seats. There were no other options. That hardly seems like a real election.
How do NY Judicial Elections Work?
At first glance, New York’s method of electing judges to its major trial court — confusingly referred to as the supreme court — is nothing extraordinary.
The process begins during the September primaries. In each assembly district, voters elect judicial delegates, residents whose sole job is to represent their neighborhood at a party nominating convention held a few weeks later. At these conventions, which unite delegates from the various assembly districts within a larger judicial district, the delegates cast votes to determine which judicial candidates will appear as the party’s nominees on the general election ballot. Voters then elect judges to 14-year terms in the November election.

It all sounds highly democratic, but the public engagement allegedly present in New York’s system is in fact an unfulfilled promise. In reality, the system entrusts the selection of judges neither to the voting public nor to elected officials. Instead, unaccountable political party leaders control every step of the process. 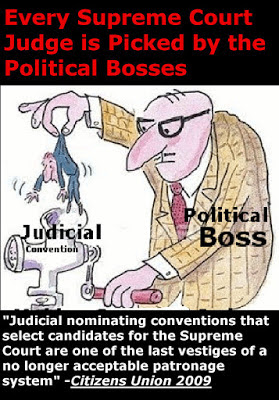 First, most delegates are handpicked by their county’s party officials and do not even appear on the ballot because they almost always run unopposed. According to the state Board of Elections, only one of the 11 assembly districts in the Bronx featured a contested delegate election this year. This means that voters often have no chance to pick who represents them at the conventions.
Second, the nominating conventions are strictly for show. The party leaders decide on their preferred judicial candidates in advance and direct the delegates accordingly; other candidates have no realistic shot at nomination. The delegates — usually party loyalists, their family members, or members of their campaign staffs — receive no information about the judicial candidates in advance of the convention, and are often given no time to debate each candidate’s qualifications, according to a New York Times investigation. In more than 96 percent of nominations, no alternate candidates are put forward by the delegates and “conventions” last as little as 20 minutes. Even party leaders have conceded that the conventions are largely performative. “These delegates really don’t have any function,” said one assemblyman, acknowledging that his wife, a delegate, knew “zero” about the judicial candidates. “There is a fairly justified perception that things are sort of decided before the delegates go in.”
All of this might be slightly less objectionable if voters had a genuine choice in the general election. But because of cross-party endorsements (when the same candidate appears on the ballot under multiple party lines) they are frequently asked to pick the same number of judges as there are candidates. For example, in New York’s 8th Judicial District, which includes Buffalo, both seats were determined before the election by cross-endorsements. This is not an aberration. More than half of the district’s supreme court nominees since 1995 have been cross-endorsed, leaving voters with nothing to do but approve the names the parties have placed before them.
The problem with judges being de facto selected by unaccountable party leaders is not only that it is undemocratic, but also that it raises questions about judicial quality. Without democratic accountability, there is a higher risk that a candidate’s job qualifications could take a backseat to other, political, considerations. The two cross-endorsed supreme court nominees for the 8th District, for example, received “Qualified” ratings from the Erie County Bar Association, the lowest of its three passing ratings.
Across the state, supreme court judges preside over the most complex civil and criminal proceedings in the state, impacting thousands of lives. Any compromise in the quality of our judges compromises the justice they mete out.
What’s Next?
In spite of the system’s democratic flaws, New York’s use of the delegate primary convention has survived constitutional scrutiny. The U.S. Supreme Court upheld its constitutionality in a 2008 decision  but emphasized that they backed neither the merit nor the wisdom of such a model. In a concurring opinion joined by Justice David Souter, Justice John Stevens said the ruling “should not be misread as endorsement of the electoral system under review.” Quoting Justice Thurgood Marshall, Justice Stevens added, “The Constitution does not prohibit legislatures from enacting stupid laws.”
Nor does the Constitution prohibit legislatures from being smart. In 1977, the legislature passed — and New Yorkers approved — an amendment to the state constitution to change the selection of judges to the state’s highest court, the court of appeals, away from the convention-based primary system.
As far back as 1989, the New York Commission on Public Integrity noted, “[M]ost of our judges are chosen by elections that are almost totally controlled by political party leaders, a system which clashes with the fundamental objective of an independent and nonpartisan judiciary…New York can and must do better.”
Legislators in Albany should replace this exclusionary selection system in which judges are “made” with one that actually reflects our democratic values.

The Sales of Justice | Village Voice

The bench press: The terrible process by which New York's ... (DN)

Why do Judges Run With Party A Affiliations?

To Brooklyn Democratic Party Belong the Power and the Spoils - The ...

“I have great questions about the quality of the judges,” said Charles Monaghan, a Brooklyn district leader affiliated with the New Democratic Coalition er who often challenges Mr. Esposito's decisions, “Meade appoints judges to fill political contracts,” said Mr. Monaghan, a magazine editor when he isn't politicking and an apparent target for Mr. Esposito in the September primary when the district leaders are elected.

Bench-Pressing; Judges Can Control Your Life. Are They Up to the Job?

A Defeat for Judicial Reform - The New York Times 2008