Lara Logan, pictured here with her husband Joseph Burkett, said that she is concentrating on putting her life back together with the help of her family 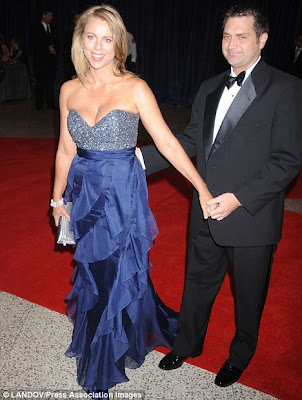 Lara Logan is back on the air, she’s got nine stories in the works at “60 Minutes” and a new show set to launch — but she still battles the demons of a horrific gang sexual assault, even sometimes while she puts her young daughter to bed.

“People don’t really know that much about (posttraumatic stress disorder),” she told the Daily News. “There’s something called latent PTSD. It manifests itself in different ways. I want to be free of it, but I’m not.

“It doesn’t go away,” she said. “It’s not something I keep track of. It’s not predictable like that. But it happens more than I’d like.”

Last Feb. 11, while covering the Egyptian uprisings in Cairo’s Tahrir Square, Logan was surrounded by an angry mob of men and ripped away from her CBS crew. She was viciously stripped and suffered a “brutal and sustained” sexual assault.

“I didn’t even know that they were beating me with flagpoles and sticks and things, because the sexual assault was all I could feel, their hands raping me over and over and over again,” she told “60 Minutes” last spring.

They tried to rip off chunks of her scalp.

“I was in no doubt in my mind that I was in the process of dying,” she said.

She was saved when a woman dressed all in black “put her arms around me,” and other women closed ranks around her until soldiers arrived.

Since then, Logan told the News, she’s been putting her life back together with the help of family and friends.

“Your family is critical,” said the married mother of two. “You can’t do it alone. My husband is a great support. He understands, he doesn’t hide from it, from what happened. He knows everything, more than anyone, what they did to me.”

It’s not as if it’s a regular topic of conversation in the house, she said. But the issue does emerge from time to time.

“My children are my life,” she said. “They’re so spectacular. They’re also so young.”

Without knowing it, little Lola, who will be 2 in March, and Joseph, 3, helped her get through the aftermath of the attacks.

“When I’m lying there, waiting for my daughter to go to sleep, I have time to think about things. Those can be dark moments. You ranger through, you have to. You’re aware of how much you have and it’s so much more than what you’ve lost. You have a responsibility. Life is not about dwelling on the bad.”

“She, really, in many ways should not have survived that attack,” Fager said. “I was looking at it from the worst-case scenario. When you heard her describe it, it seemed that way. I was concerned with her health and would she come back.”

It wasn’t until a visit at Logan’s home about two months later that he knew she would be okay, that the spark that was missing early on was alive again.

“She’s one of the toughest people I’ve ever known and determined in every way,” he said.

But even with a positive attitude, healing can be difficult.

“Living with it for the long haul is a different thing than trying to pick yourself up in the initial aftermath,” Logan said. “I thought it was going to be a lot easier than it really is. It was very clear from the first moment, I was not ashamed to talk about it. I knew I could deal with it. I knew I would be okay, ultimately.”

As a journalist, she said, she’s always felt like she could connect with viewers — with people — in a real way.

Now, some of them talk to her about their own sexual abuse. If anything, they might have a better sense of who she has become.

Women she’s met all around the world — and those who have written her who have suffered similar incidents, if not far worse — have provided inspiration, too.

“When people come up to me and they feel like they can talk about something so completely disturbing, how can I not be moved by that?”

Her career, she said, is also a key component to overcoming the emotional and physical trauma. From the start, her bosses at CBS have let her come back at her own pace, something for which she’s immensely grateful. “CBS is not holding me back, but they’re not forcing me forward,” she said.

Besides “60 Minutes” and reporting for the “CBS Evening News with Scott Pelley,” Logan is co-hosting CBS’ revival this year of “Person to Person” with Charlie Rose, which returns Feb. 8 at 8 p.m.

“She’s having a really good year,” Fager said, noting her work gets better on each piece.

Though her role as a journalist hasn’t changed, how she does it these days has. She gives more consideration to safety when looking at story ideas. And, unlike earlier in her career when she would do an interview and fly out the next day, Logan travels overnight to be home with her children.

“Whenever you make a decision to do a story or go to a difficult place, you look at all the factors and that’s how you decide, ‘Is it possible for me to go there,’ ” she said. “‘What makes sense, what’s smart,’ and I still get the story and do a smart thing.”

The media has become a target in some places, for sure, and her name recognition after the attack could make going into some regions even more dangerous.

One interview she’d been working on with a Taliban commander was deemed too risky for her to make the trip. She understands why those decisions have to be made, but doesn’t like the change.

“It burns my ass, it does,” she said. “I’m also okay with it. I know that’s the right decision. Life is full of frustrations. You can’t do everything you want.”

What keeps her going, she said, is the people she’s met along the way. She thinks about the strength it has taken others to go on after their families have been massacred. Or those who live in countries where they can’t speak out at all.

She recalled one woman in Africa who was raped and disemboweled, who said she had to live because she wasn’t going to give her attackers everything.

Lara Logan knows exactly how that woman felt, and that’s part of what drives her today. She refuses to be defined by the attack.

“Goddamnit,” Logan said, “I’m not going to give them everything.”