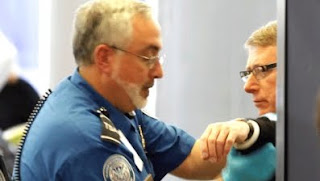 The public outcry over the government's new pat-downs gained momentum Wednesday, as a California district attorney vowed to prosecute any complaints of inappropriate touching by airport security screeners and a U.S. congressman called for screeners to receive improved training.

The developments came as the head of the Transportation Security Administration, John Pistole, acknowledged that the new pat-downs are more invasive than what travelers were used to in the past.

The "enhanced" pat-downs of airline passengers who opt out of using the high-tech body scanners require screeners to touch travellers' breasts or genitals.

Airline passenger John Tyner drew national attention after recording on his cell phone an encounter with a TSA screener in which Tyner warned he would have the male screener arrested if he touched "my junk." Tyler was thrown out of San Diego International Airport and faces a $10,000 fine if he is sued by the TSA.

Steve Wagstaffe, the incoming district attorney in San Mateo County, told FoxNews.com that he would charge screeners with sexual battery for complaints of inappropriate touching with sexual or lewd intent.

Don't 'Check In' to Wars But if the complaint is simply that a TSA screener went too far with a pat-down, "That's not a crime," Wagstaffe said.

"It becomes a crime when someone does that touching, reaches under the blouse and fondles breasts," he said. "That's a crime under California law."

If convicted of a misdemeanor, TSA screeners would face up to one year in the county jail; for a felony, which would involve skin-on-skin contact, they would face up to three years in state prison.

Wagstaffe said he has not received a complaint yet and he believes all the attention on airport screening will cause TSA to be more careful.

After appearing on a Fox News show, Pistole declined to comment to FoxNews.com about Wagstaffe's comments.

Rep. Bennie Thompson, D-Miss., chairman of the House Homeland Security Committee, is calling for improved training procedures after a government report found some flaws with the oversight of TSA's training program.

"In light of recent aviation security events and the new pat down process for screening passengers, training is more important than ever in both securing the aviation system and maintaining suitable privacy and customer service standards," he said in a written statement. "Training is the critical lynchpin in an effective aviation security program. Without suitable training, technology and established screening processes are ineffective."

The Office of Inspector General in the Department of Homeland Security released a report that showed TSA did not establish a lead office to organize and coordinate the training program until 2006, and that office didn't actively start overseeing the program until 2009.

"Without a documented process for updating training based on screener performance data and changes in technology or equipment, the Transportation Security Administration may be missing opportunities to enhance its officers' skills and abilities," the report read.

In testimony to a Senate committee about TSA policies and procedures, Pistole said he has received the new pat-down, as has his boss, Homeland Security Secretary Janet Napolitano.

Pistole said he understands the privacy concerns but added that the government must provide the best possible security for air travelers.
Posted by joe levin at 10:18 AM